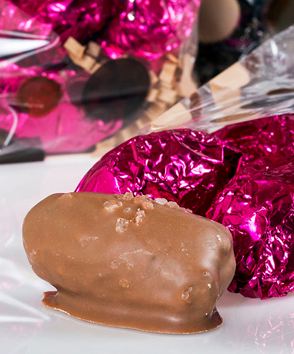 In late 2014, I had a bright idea! Why don’t I create “fancy” dates and start a food company. If I knew then what I know now, I may never have taken that idea any further. If you don’t want to know that it’s more work than you ever imagined; that there are more steps than you thought possible; and that it will take more capital than you initially anticipated, then don’t read any further.

My idea was sparked following a trip to Dubai, UAE in 2012. The purpose of the trip was to visit my cousin and his family; not to start a company.

Two key incidents occurred that altered the direction of my life and my outlook.

1) While in Dubai, I discovered dates. They were as popular there as coffee is in the West. One company, Bateel, had turned dates into a luxury item by offering a wide variety of delicious choices that included caramelized pecans, roasted almonds, ground pecans, crystallized ginger and orange; and dipped in chocolate. I was hooked, as was every person lucky enough to receive one of the beautiful gift boxes I brought home with me.

2) I was laid off. Devastation led to a fire and determination to never give anyone control over my life again. It was my life. I am its master. I knew I didn’t want the rebound job, and somehow I kept thinking about the delicious dates. I became obsessed, and started researching.

The questions that needed answering were numerous. For each answer that I uncovered, it led to 10 more questions. The task was daunting.

Some of the preliminary questions included:

Where does one buy dates? Can I buy them at wholesale prices?

Oh wait – how many varieties of dates are there?! 400+ it turns out!! Which ones should I work with? Where do they grow? Not in Canada, so where do I find them?

What do I do with them once I find them? I’m NOT a chef! I struggle with toast. But – I do know food. I don’t think there’s a restaurant I visit without “tweaking” the menu, and often I’m told I’ve created an item that should be on the menu. I’ll let my tastebuds direct me where my talent as a cook may fail.

I started to try recipes, and focused on a roasted almond infused in the date. Before I found the perfect roasted almond recipe, I went through several “sticky” honey roasted; a maple cinnamon – but it involved eggs, and I didn’t want to involve dairy; dry roasted; under roasted; over-roasted, burnt, and raw – I did it all!

Once filled, the next step was to enrobe (a fancy word for dip) in chocolate.

Chocolate – how hard can that be? HARD!! The art of tempering chocolate so that it doesn’t bloom will be a whole article in and of itself. There are classes, but very few master chocolatiers, and with good reason.

Packaging – hundreds of hours were dedicated to finding packaging that was beautiful, large enough for the dates, but not so large that they rattled around, priced reasonably, and easy to assemble. Candy trays didn’t fit the dates, so candy cups became necessary. These were also a major challenge. And what about all the rules if packaging for retail? English and French; weight in grams; basic description of product; ingredients (in English and French); allergens (like almonds)

Can I print on the box? NO! That is custom. And a custom box is very expensive when dealing in small quantities. Label? Bellyband (belly what?!) I ended up with a belly band around the box. It was a bit deep, so I also had to line it with a piece of cardboard.

Ok – you get the idea – there was lots to think about. And all of this followed the actual legal structure and naming of the company.

I had incorporated a business several years ago. MAX Communications Ltd. This was fortunate as it would become the parent company to the new “branch.” In other words, both would share the same Business Number, but would file separately for GST. The branch would be MAX Communications operating as…

WHAT?! What would I call the company?

This became an exhaustive search in itself. I had pads of paper everywhere. In my car, beside my bed, in the living room – so that each time I thought of a name I could write it down. Hundreds of names, seemingly perfect until two days later I no longer liked the name! During a conversation at EvansHunt, Jim Button, one of the principles, started asking about the origins of dates. Mesopotamia (Ancient Persia) 2,000 – 3,000 years B.C.

Hmmmm – this conversation started to percolate, and I started researching Mesopotamia, dates, gods, origins, meanings… I came across a variety of gods. Tammuz, the shepherd-god was known as God of Food and Vegetation. But in the Akkadian Empire and the land of Akkad (which later became Assyria and Babylon), this god was called Du’zu. Somehow I’d found the name.

DUZU, God of Food and Vegetation. We had a perfect name!

I had the structure, the name, had started to generate some product ideas with the expert help of Albert Karylo, Chocolate instructor at SAIT, and next I had to think about distribution channels. I began towards the end of 2015 in a couple of Farmer’s Markets and also sold some packages corporately. Each month, ideas and concepts were becoming a bit more solid.

The next level is a strong argument for building one’s network and using it fully. I was instructing at Mount Royal University (on contract to pay the bills), and of course I brought my products to the staff room for those around me to sample. They were a big hit! One instructor brought a package home to her husband who worked at Calgary Co-op and he presented the package to the buyer. Voila! They committed my line to 12 Co-ops!

Sounds easy – but this was one year after conceptualizing the idea. And 12 Co-ops is not going to send me to retirement.

Every day, I worry and work hard to define the future growth of the business. Everyday I wonder if I shouldn’t just “get a job.” But I won’t, and the threat of the very idea of doing that is the driving force that keeps the business moving forward.

Today, the master chocolatier with whom I gratefully work, is Bernard Callebaut – the man. The company that he used to own that bears his name belongs to someone else; his company is now Master Chocolat. With all the years of history in building a business, he is doing it all over again, and I am lucky to benefit from his expertise.

That is the final piece of advice to offer in this column. Identify masters and mentors. Work with them; ask questions; be a sponge. Finally, use it wisely and make decisions.

Moving forward is more important than waiting for perfection. Unfortunately, that is the hard part. Driving your idea forward and seeking ways to grow it. Every day. Standing still is easy and so boring. If you have an idea – go for it!